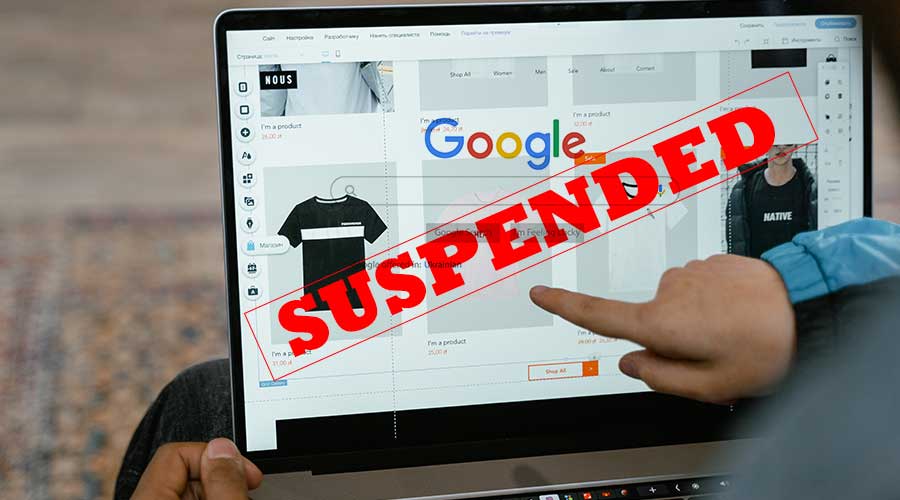 Google makes it a point to create safe and positive experiences for everyone who uses its platforms.

This means that they must enforce policies and regulations for those selling on Google as a means of protecting every person who uses their platform. These policies are specifically in relation to Google Shopping Ads and the way businesses make use of them.

Google’s Shopping ad policies cover four bases, prohibited content, restricted content, prohibited practices, plus editorial and technical requirements. All merchants selling and promoting their products on Google and their partner platforms, thus, need to adhere to these policies. Failure to do so results in Google suspending your business from promoting or selling its products online.

Yes, Google can suspend you and it makes sure to practice this action whenever people and brands misuse their platform. This is a scary thought for brands who promote and sell their products heavily on Google, but it’s for a good reason. Google wants to create and maintain a safe space for all their users with high standards and quality experiences. This, however, should not deter businesses from using the platform for promotions as there are ways to avoid suspension. To do this, you firstly need to know and understand Google’s Shopping ad policies, which we will explore further below.

There is content that Google refuse to allow in any capacity, as a means of protecting their users from potential harm and victimisation. Posting anything Google prohibits on Google Merchant Centre or your eCommerce store will get you suspended from Google platforms. This includes the following:

Google does not allow the sale or marketing of fake goods/unauthorised replicas. Marketing of such on Google spaces, or the attempt thereof, will result in your suspension.

Harmful products, for example weapons and illicit drugs, cannot be sold on these platforms as Google aims to keep people safe online and offline. Thus, any products known to cause great harm cannot be put on Google.

Honesty and fairness are two of Googles values, thus they refuse to promote products and the use of products that push dishonest behaviour. For example, fake documents and hacking software.

People all over the world from diverse backgrounds and beliefs use Google, and Google works hard to avoid offending any of them. So, in line with their value for respect and diversity, Google prohibits content that showcases intolerance, discrimination, hate promotion and violence.

One of Google’s functions is to help businesses promote their products, but unfortunately some Google platforms are unable to optimise the sale of certain items. Thus, to deliver optimal user experiences continuously, Google chooses not to allow the promotion of products they cannot optimise.

Online content can sometimes be culturally or legally sensitive. This makes monitoring and restricting the use of some content important for platforms that reach millions of diverse individuals. Especially regarding the legality, safety and accuracy of the product information shared. For this reason, Google allows certain content, but with limitations on how, where, to who, and in what way it is promoted. This list includes:

Google has made certain actions and practices illegal on their and their partners’ platforms, as a means of shielding their users from exploitation and victimisation. These practices include:

For platform users to trust Google, Google needs to protect their information by handling it respectfully and with great care. This is the reason why they will not let advertising partners misuse or collect user data without the appropriate security measures.

Shopping ads need to be useful, relevant, and safe for all users according to Google. As a result, they will not accept malicious content, sites offering little value, retailers attempting to bypass review processes or gain unfair advantages in campaigns.

As mentioned before, Google is all for honest and transparent practices and product content. So, any content that could mislead users is sifted out by Google and not shown on their shopping ads. Thus, to avoid suspension for this, do not create promotions with false representation or promotions prompting users to initiate anything without consent.

Editorial and technical requirements are what Google uses to ensure they deliver engaging ads that do not frustrate platform users. Similarly, Google has professional and editorial standards all Shopping ads must meet for quality purposes. These standards expect promotions to be clear, professional, and lead customers to relevant pages. Promotions that don’t meet these requirements will not be pushed by Google.

How to avoid suspension

Your business never has to experience suspension from Google platforms, if you follow a few steps that will keep you on top of your eCommerce products. To handle your eCommerce better, here are some things you can do.

Uploading feeds to Google Merchant Centre assists your business with pushing its online products to the right customers for greater sale conversions. If you attempt to upload content that goes against any of the above policies, Google will suspend your brand from promoting anything. Thus, you need to be specific and careful with product feeds and content.

Step 3: Use an effective eCommerce Solution

Digitrade’s eCommerce Solution has powerful online capabilities that help you effectively manage the product content you share online. Digitrade also offers you the skills and advice of eCommerce experts to support your business with its online store. Get their assistance and ensure your eCommerce doesn’t experience Google suspension. Click here for more.